Blockchain: What it Means for Accountants

Blockchain: What it Means for Accountants

So you might have heard about the mysterious "blockchain" (or maybe you haven't) and thought to yourself, "what the heck is blockchain?".

Granted, the very notion of blockchain sounds quite technical, but we're here to break it down, as it has a strong impact on the future of financial and accounting industries, amongst others.

Blockchain is, in essence, a distributed ledger that allows people to view information, but are not able to alter or copy it in any way. Blockchain is also completely secure due to the fact that it's not on a centralised database. This means that blockchain is live across a series of computer networks, making it impervious to hackers.

No doubt, a helpful and welcome development for accountants globally.

The first instance of blockchain was initially created to process cryptocurrency transactions such as Bitcoin. However, it has now evolved to a point where it can be used to record financial, physical or electronic assets that can be shared across a network. All informational updates are transparent which improves how information is shared and reduces the likelihood of fraud, error and costs.

How Does Blockchain Work? 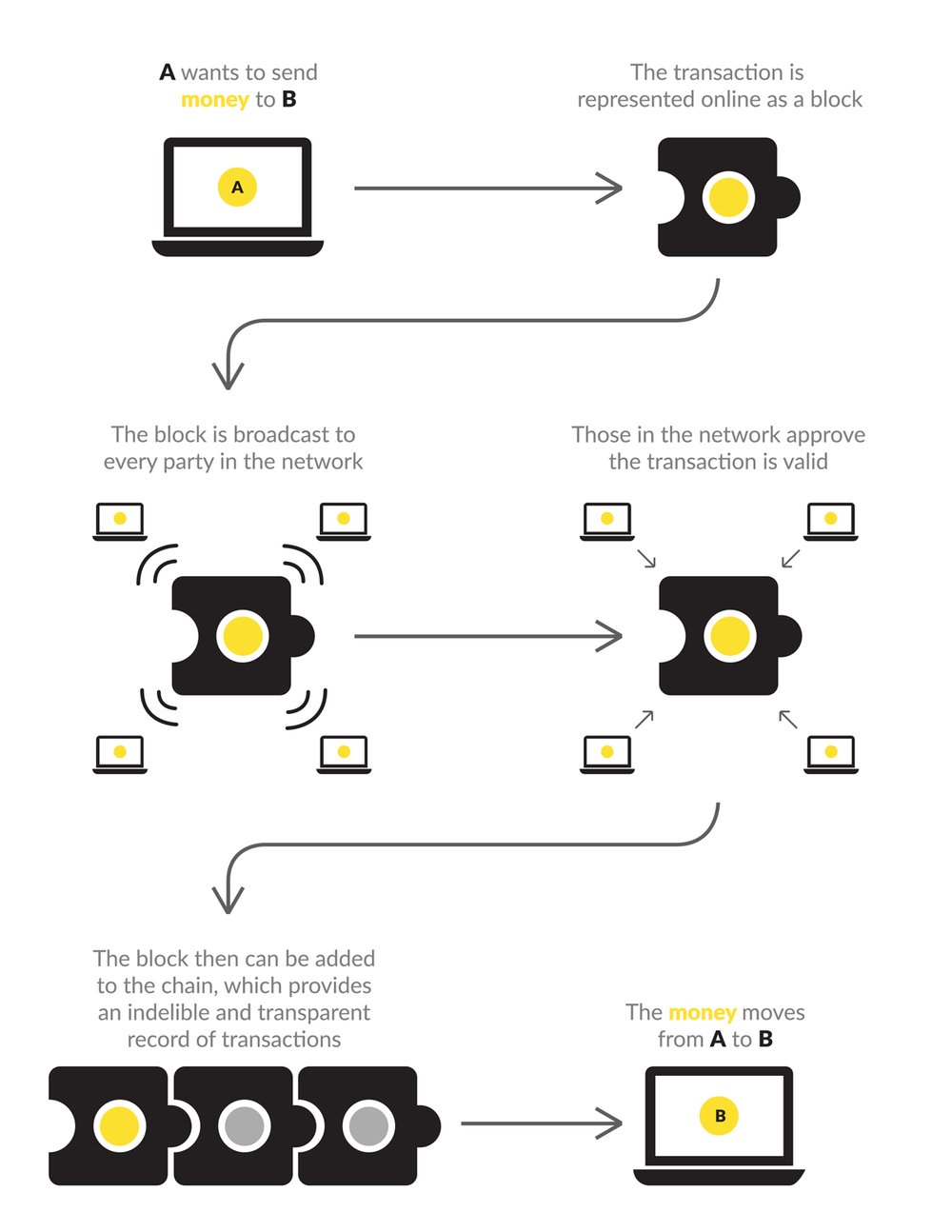 With our simple infographic above, we aim to show you how blockchain works in its simplest form using money as an example.

Transactions are represented as blocks, which are time-stamped. These blocks are then "broadcast" to all in the network who can then approve the transaction as being honest and valid. The verified block(s) can then be linked to previous blocks in the chain - hence the name "blockchain".

The beauty of blockchain is that it's undeniably incorruptible and unalterable - making it the perfect piece of technology to record transactions, amongst other things. As all information is updated in real-time, each recorded block remains permanent, and is unable to be deleted. More importantly, blockchain allows for network participants to view, verify, and audit transactions without a third party. This feature provides a great deal of certainty and trust with each transaction made.

Blockchain: Is it Really That Big of a Deal?

Blockchain is a disruptor, which makes it a big deal in of itself. It's also significant in the face of recent cybersecurity issues for both private companies and government-led public sector companies.

One that should catch the attention of accountants was the recent issue with HMRC's online tax service. In that case, a researcher by the name of Zemnmez identified two flaws on the HMRC's online tax website. He found that an attacker could possibly use the HMRC site to their advantage and "forward" a victim to any site they wanted, getting them to "reveal financial information, credentials, and usernames and passwords."

The worry of cyber attacks is another reason why the blockchain movement has picked up so much speed. With its promising, unhackable and transparent system, it's proving to be a much needed saviour for businesses dealing with sensitive information.

In addition to this, with the upcoming GDPR legislation, blockchain could also help to reduce any possibilities of companies suffering data breaches.

Why Accountants Should Get on Board

Cloud-based systems are already a proven game-changer, so accountants should be embracing blockchain with open arms.

As blockchain is one of the biggest disruptors in business, even the UK government has given the go-ahead for blockchain by testing an app trial for people receiving benefits - meaning it's opening up the world in which the public sector can now have access to the same technology.

"Any new technology creates challenges, but with the right mix of leadership, collaboration and sound governance, distribution ledgers could yield significan benefits for the UK."

Blockchain certainly holds great benefits, especially for accountancy. With blockchain, certain accounting practices and processes will eventually become obsolete. The technology is already set to streamline processes quickly, and in some cases automate them.

For example, if a transaction block is entered into the chain, it cannot be changed. Corrections can be made afterwards, but as everything is transparent, data cannot be falsified. This would make things like auditing easier and much more reliable for everyone involved.

As a digital marketing agency for accountants, we're saying that the future is now and accountants should start making themselves familiar with blockchain tech and how it can work for you.

By being a part of the conversation on how blockchain needs to work for the accounting industry, you'll be able to utilise this technology to your company's advantage.

If you're looking for more ways you can future-proof your accounting processes and stay ahead of the curve, download our free eBook 'Future-Proof Your Marketing' today.